How The Cuckoo Clock Got Its Name

by Dutch Antiques on November 16, 2022 in Uncategorised

When it comes to clocks there aren’t many that are more iconic and recognizable that the cuckoo clock.  The distinctive cuckoo bird marking the passing of each hour is something that anyone will instantly recognize, even if they don’t know anything else about clocks.  Many people have wondered over the centuries how this type of clock was conceived of.  How was it named? Why have a cuckoo bird of all things appear every hour? These are all great questions, unfortunately, there aren’t a lot of clear answers.  Cuckoo clocks originated several centuries ago, and like many other things that originate that far in the past, clear answers are not always readily apparent.  Fortunately, there are some clues that can help to at least paint a partial picture of the origins of this unique clock.

The name of the cuckoo clock comes from the iconic cuckoo bird that makes an appearance at the top of the hour to announce that the day is an hour closer to being over.  With a cuckoo clock there is a constant reminder of how much time has passed, which can be a good or a bad thing, depending on how you look at it.  If you feel like your day is dragging along and taking forever, that hourly reminder might start to get on your nerves a bit. 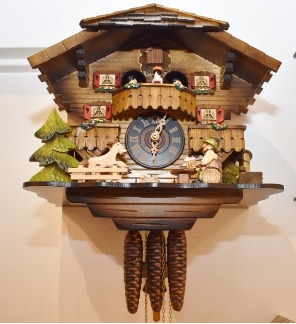 With the mystery of the name sorted out, you might be wondering how a cuckoo clock came to be in the first place.  What was the inspiration behind it? Why choose a cuckoo bird instead of, well instead of anything else? Why have it announce the passing of each hour?

But that’s where the answers come to an end.  Who created the very first cuckoo clock? Why did they choose a cuckoo bird to symbolize the clock and give its name to it? These are questions that likely will never be answered, but even though it’s origins may not be clear, the appreciation for this iconic clock is.

Cuckoo clocks are enormously popular and come in many styles, some classical, and some with much more modern designs.  This means that regardless of what type of décor your home or office has, a cuckoo clock can fit in and find a place.  So, if cuckoo clocks hold a special place in your heart, like they do for so many other people, then feel free to reach out to us today.  We’d be happy to share our knowledge, and help you find the right clock for you.