by Dutch Antiques on February 7, 2022 in Uncategorised

Weight-driven clocks, as the name suggests, are mechanical clocks powered by falling weights that hang on a chain or cable. With the aid of gravity, the weights are pulled down slowly, typically in a period of 7 days. After which, the weights go back up. The chain or cable holding the weight needs to be manually pulled up or wound using a crank to start another cycle.

In this article, we’ll take a closer look at how weights keep antique clocks running.

History of the Weight-Driven Clock

Weight-driven clocks are said to have been produced as early as the 13th century. Typically installed in churches, cathedrals, and monasteries, weight-driven clocks, known today as turret clocks, had heavy weights to power their movement. These clocks did not have a dial or hands and only struck the hours. Weight-driven mechanical clocks guided monks in keeping track of the hours for prayers on a daily basis. Monks also used weight-driven clocks to predict the occurrence of eclipses and determine dates of feast. 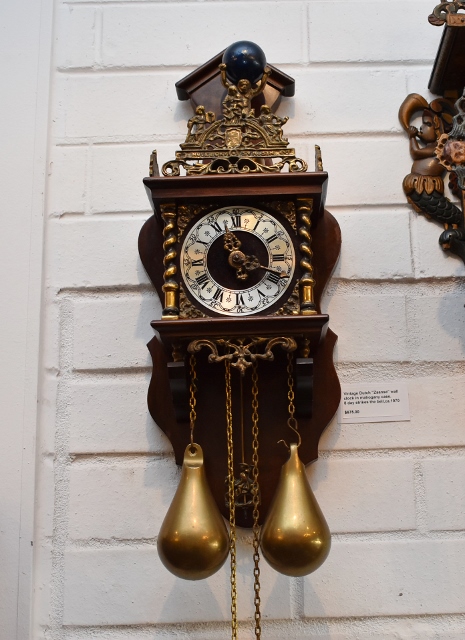 The middle of the 17th century marked a significant landmark in watchmaking when Dutch astronomer, physicist, and inventor Christiaan Huygens, added the pendulum in the design of weight-driven clocks. The addition of the pendulum increased the accuracy of clocks.

Simply put, the weights of the clock are like its engine. It stores potential energy that powers the clock’s movements when the chains holding the weights are pulled down.

Weights are often cylindrical or rectangular in shape with a polished metal alloy casing, like brass. Some weights are embossed or have a decorative shape, like pinecones. The filler in the casing is of a heavy material, like lead and cast iron.

The number of weights in a mechanical antique clock depends on the type of clock. For example, antique grandfather clocks typically have 3 weights, each of which performs a unique function. The left weight powers the hours strike, the centre weight provides power to the pendulum that regulates time, and the right weight powers the chime melody. The weights usually come with the label at the bottom for easy assembly.

As the weights drop, they produce kinetic energy that drives the clock’s gear train to move. Typically, it takes 7 days for the weights to go down and then they have to be raised to their original position using a crank. Otherwise, the clock will stop running.